In 2020, the Pew Research Center reported that parents are increasingly concerned about the amount of time their children spend with devices. But when it’s so easy and tempting to distract your kids by handing them a device as you do pretty much anything else, screen-free play time has sort of become a thing of the past for a lot of busy parents.

Here to save parents, at least on a somewhat pre-planned basis, is Hyper Kidz—an enormous pastel and neon-colored play-zone that doesn’t have a screen in sight. Hyper Kidz, as the name implies, has everything you can possibly imagine to knock the energy out of your children before you return home.

Bynia Reed, owner of Hyper Kidz, the “ultimate indoor playground” for toddlers to 13-year-olds that recently opened in Ashburn, says, “part of our mission is to provide an indoor play space for kids so they can get back to old fashioned social play, where they have live conversations and interactions with other children. With devices they don’t get that.” 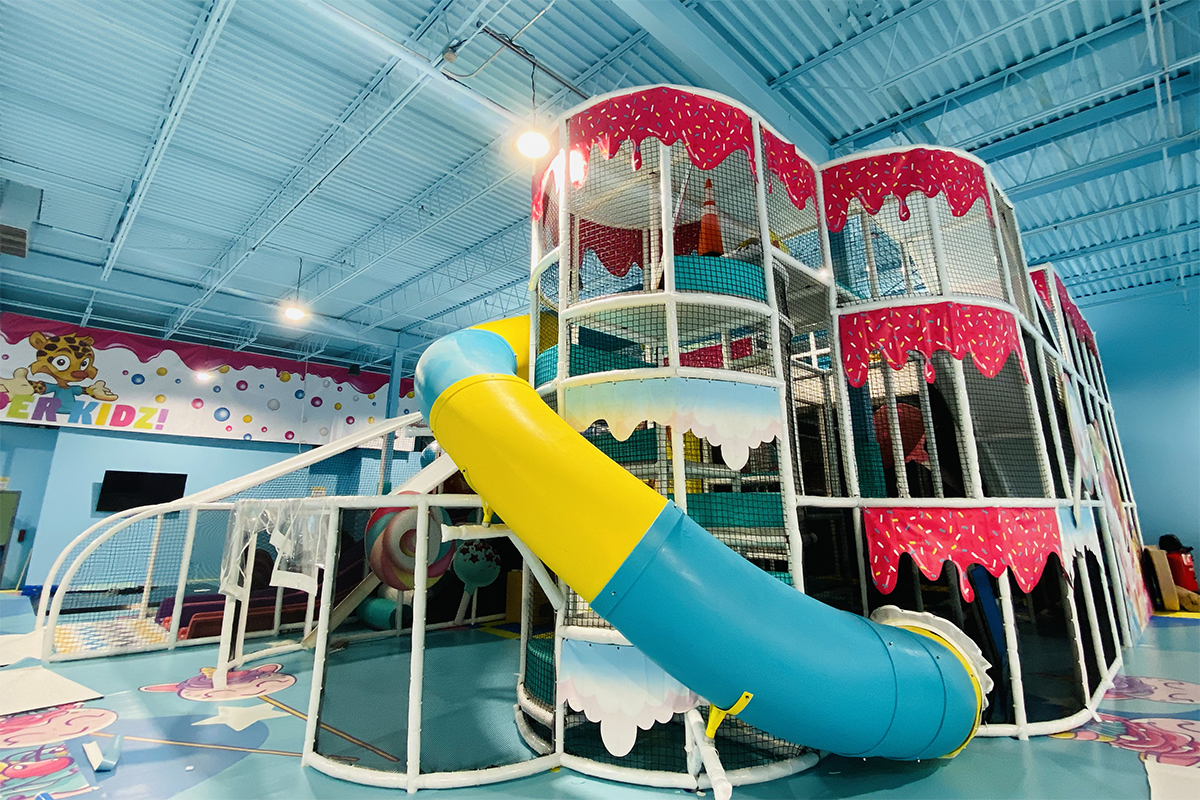 “Devices put distance between kids,” says Reed, “and this is the crucial part of their formative years where they’re learning how to socially engage, take turns and negotiate.” She says that by playing with other children, kids are better able to learn how to have conversations and learn manners. “We purposefully went against having VR and [devices] that put you in interaction with a game, and not another human being.”

The activities that children will find at Hyper Kidz are broken down by age range. For babies and toddlers, the mini zone has soft play equipment that’s mounted to the ground. They’ll get to interact with the play equipment to enhance their fine and gross motor skills by using colorful, soft-play equipment in that zone. Reed says to expect, “bouncy things, little climbing apparatus, nothing that involves swings or motorized equipment.”

The Kid Zone, for ages two to seven years old, there’s motorized equipment with slow moving parts, a balloon house with balloons that fly around, three slides into a ball pit, giant light bright-inspired peg boards that are backlit with designs that allow kids to create their own art. There are also giant foam shapes they can build with to build structures with their parents. The Big Kid Zone is for ages up to 13 years and is a four-level play structure that covers 3,000 square feet, with seven slides, a zip line, two trampolines, all kinds of climbing obstacles, and a giant ball pit that’s like a pool. There are also eight ball blasters that shoot foam balls as kids climb up to higher levels while they blast each other.

Opened in Columbia, Maryland, in 2018, the Ashburn location is its third and has been open since August 13. Reed says that they plan to continue to expand. “Now we plan on focusing on franchises because we feel like every community needs a Hyper Kidz. For the families there it’s year-round fun, safe climate and controlled, and affordable. Right now, we’re just focusing on the DMV area, and hoping to expand in the future.” Parents can host birthday parties in one of four huge room that they can rent. Hyper Kidz offers parties in so many different packages that it will make your head spin. There’s a Super Party for a small group, a Mega Party for a group of up to 15, a Colossal Party for up to 20, a Royal Party if your pack of kids likes princes or princesses—or you can just book the entire place, which includes a 17,000-square-foot, candy-themed indoor playground.

Perhaps the best thing about Hyper Kidz is that, if you’re having a play-related emergency, you can toss the kids in the car and hustle them over to burn off steam seven days a week during operating hours (Monday to Saturday, between 9 a.m. and 8 p.m., Sundays 11 a.m. to 7 p.m.). It’s something to get hyped about. 21641 Beaumonde Cir., Ste. 311, Ashburn.

Why Boeing Moved Their Global Headquarters to Northern Virginia