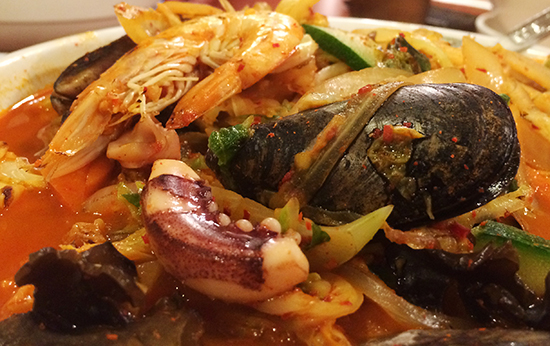 While there’s no English-language signage for Jang Won, you can navigate the menu through English descriptions and pictures. Don’t let the black-covered noodles dissuade you from a dish just as savory as a Bolognese. In ja jang myun, extra-long noodles surrender under a sludgy concoction of black soybean paste. It’s salty for sure, a little sweet and dotted with bits of pork and lots of cooked-down onions.

For something spicier, jjam bbong weighs in with multiple types of seafood (mussels, octopus, calamari, shrimp) in a bright orange broth so spicy, but so lovely, I keep sipping through coughs.