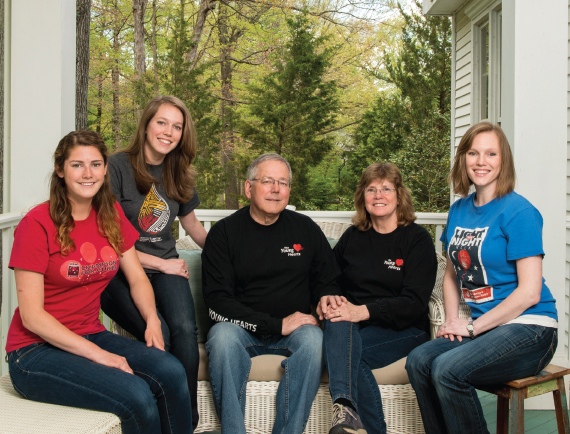 In 1999, 13-year-old Ryan McLaughlin died of leukemia. For Ryan’s family—father Mike, mother Prince and sisters Sarah, Mary and Regan—it was naturally devastating. “My oldest daughter, Sarah, was having a terrible time dealing with losing her brother,” Prince says. “She wasn’t talking to anybody.” To help distract her from the tragedy, Prince says they encouraged Sarah to form a charity team for an upcoming Light the Night Walk, a charitable event organized by the Leukemia and Lymphoma Society. “Sarah formed a team called the Young Hearts,” Prince says. “It was wonderful.” Though they didn’t know it at the time, forming that team would help ease not only their pain but countless others’ as well. Over the next decade, the team made its way down the family line, to Mary and then to Regan, and grew in size and scope. Although the McLaughlins have long since graduated, the Young Hearts lives on as an academic club at WT Woodson High School in Fairfax. To date, it has raised over $750,000 for organizations such as Leukemia and Lymphoma Society, Life With Cancer, HopeCam and others. But money isn’t the only thing the Young Hearts contributes. They also lead a charity drive called Blanket Fairfax. “When my son was sick, people gave him lots of food he couldn’t eat, flowers and all kinds of games,” Prince says. “But one of the things that he was always with was a particular blanket that somebody gave him.” As part of the drive, the group donates blankets to newly diagnosed pediatric cancer patients in Northern Virginia and, soon, D.C. “We want the kids who are receiving the blankets to think there’s someone out there thinking of them,” Prince says. “We want it to be personal.”