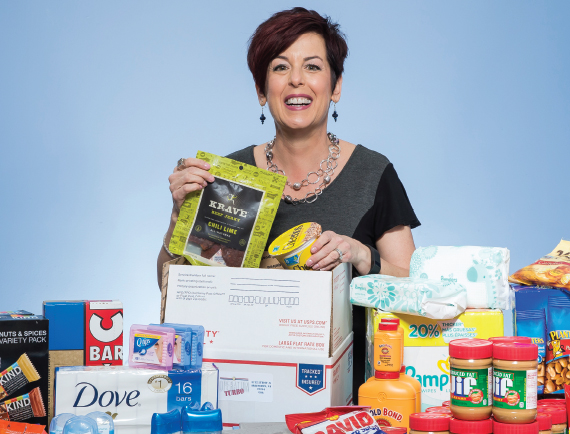 When Dyan Zurick Smith toured her niece’s U.S. Navy ship, the U.S.S. Stout, in 2010, she was dismayed by what she saw. But it wasn’t living conditions that made her heart sink; it was something that Smith’s niece, Heather, told her: The ship’s sailors never seemed to get mail from home. “So many in our military don’t receive mail the whole time they’re deployed,” Smith says. “We need to support them to let them know that their service to our country is not forgotten.” So Smith, along with her husband, Jeff, founded Operation Turbo, a nonprofit that sends care packages to deployed troops in the U.S. Navy, Marines and Army. Each month, Smith and her team of volunteers fill personally addressed “boxes from home” with baby wipes, powdered Gatorade, protein bars and beef jerky and a little candy. “We try to send supplies that we know they can use,” says Smith. “Anything that can be shipped and is compact enough for them to store on the ship or in their backpacks.” Smith also includes a Moleskine journal so troops can write down whatever thoughts they might be having. “Journaling is a healing process,” Smith says. “What they do with the journal is up to them, but we hope they take the journal and write about their experience.” So far, the response from service members has been overwhelmingly positive. Smith recalls a letter she received from a soldier who described the reaction when opening their Operation Turbo care packages. “He said watching them open those boxes was like watching children at Christmas,” Smith remembers, fighting back tears. “And he said his box was the best box he had ever received.”