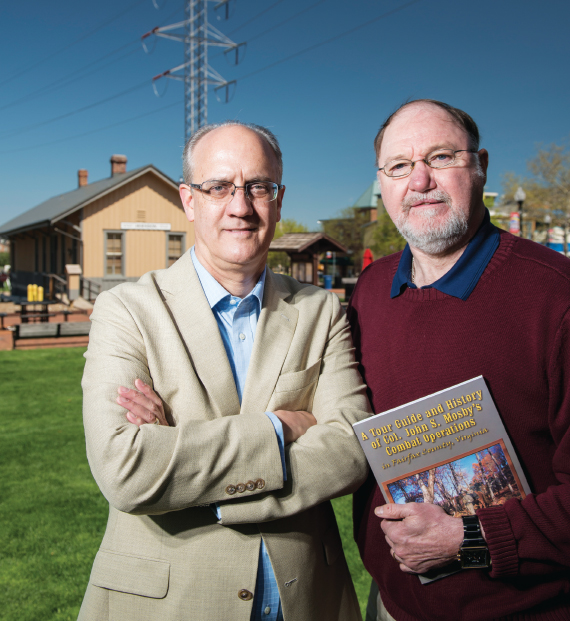 Watch where you step—you might be treading on history. No two people in Northern Virginia know that better than pro-amateur historians, authors and filmmakers Don Hakenson and Chuck Mauro. For 25 years, the duo has tracked the past movements of Confederate army commander John S. Mosby in Northern Virginia. Their mission? Preservation. “A lot of the [battle] sites have been replaced by new developments,” Hakenson says. “I didn’t want to see a 7-Eleven on top of a place where men may have died in combat.” To help preserve NoVA’s Civil War history, in 2011 Hakenson and Mauro released “Mosby’s Combat Operations in Fairfax County, Virginia,” a 90-minute documentary, which later became a book of the same name, touring the modern-day sites of skirmishes involving Mosby’s infamous rangers. And now, there’s a sequel of sorts: a book about Mosby’s involvement in skirmishes that happened in Loudoun County. “We have identified so far over 70 sites,” Mauro says. Some of the former battle sites lie in fields or in wooded areas. Some are on private property. And others lie beneath convenience stores or golf courses. “Sometimes, there’s no historical marker to identify what occurred there,” Hakenson says. When that’s the case, they have to rely on prior knowledge and research to figure out where a battle might have occurred. Their plan, so far anyway, is to release the new book in December. “That’s ambitious,” Hakenson says. “But I think we can do it.” Next time you see a pair of men taking photos of gas stations or a particular stretch of Route 7, don’t be afraid to stop and say hello. It might just be Hakenson and Mauro.