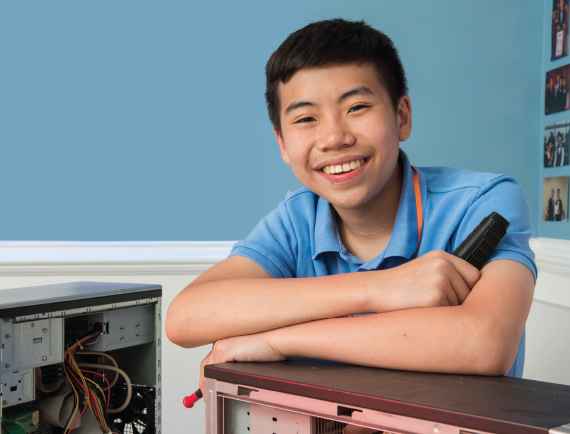 Most 16-year-olds are too busy worrying about getting good grades, dating and socializing to be charitable. But Chris Cao, a sophomore at Thomas Jefferson High School for Science and Technology in Alexandria, breaks the typical teen mold. Last year, Cao founded Reboot for Youth, a nonprofit organization that exists to provide underprivileged youth with computers. The initial inspiration for Reboot for Youth came from an interaction Cao had at a peer tutoring group. “I met this third grader, and he opened up to me about his family’s financial situation,” Cao says. “He told me his family couldn’t provide a computer for homework.” After hearing the third grader’s story, Cao, who always had a knack for tinkering with computers, had a thought: Why not refurbish one for him? So Cao did just that, and Reboot for Youth was born. Today, the organization, which Cao runs with COO Griffith Heller, takes computer donations from individual donors and corporations and, along with a team of between 15 and 25 student volunteers, turns the nonworking computers into usable machines for students in need. “We’ve been targeting schools with a high free and reduced lunch rate,” Cao says. “We try to find students that have been recommended by their counselors.” These days, Reboot for Youth receives between 25 and 30 requests for computers each week. It’s hard work, and along with his friends, Cao says he spends hours building computers each week. But he couldn’t be happier with the tidal wave of requests. In fact, Cao’s next focus is sending computers to countries like Nigeria, Cambodia and Vietnam. “I hope to impact as many areas around the world as we can,” he says.