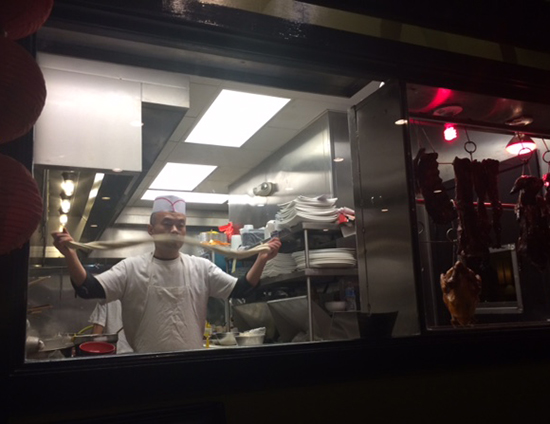 Is it wrong to stare? Because through the glass window I can see him. His face is blank, like he’s not making magic with his fingers. He stares at something. Maybe the air. Maybe nothing. He’s probably taken over from the repetition. He’s in a daze by swinging and pulling over and over again, stretching dough into noodles. I wonder what he’s thinking about as he hypnotizes anyone who looks in his direction. How many people fight to sit on the kitchen-viewing side of the booth to see their noodles spinning through the air, then plunked into boiling water, scooped into a bowl and topped with a salty, porky, dense sauce of fermented soybean paste.

He finally catches me staring. I point to the noodles and then place my hand over my heart, nodding and smiling. He smiles back.