There are other plans to make commuting into and out of the District better and more convenient. One of the most used routes is the 14th Street bridge, which carries approximately 200,000 vehicles every day.

The 14th Street bridge is actually a complex of five spans—three bridges, one railroad span (the Long bridge for CSX transit) and a two-track Metrorail span (the Fenwick bridge for the Yellow line). 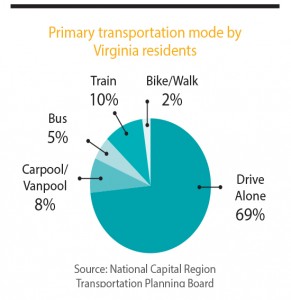 The four-lane George Mason Memorial bridge is designated for southbound traffic, the four-lane Rochambeau Memorial bridge for northbound traffic, and a third bridge between the two carries two express lanes each way—traffic on Interstate 395 and U.S. Route 1 across the Potomac into Arlington and from Arlington to the southwest freeway in the District.

Rehabilitation work by the District Department of Transportation (DDOT) began on the bridge in April 2009 and was completed two years later at a cost of $27 million, making major repairs for the northbound bridge and minor repairs to the southbound bridge, with the HOV bridge being left alone for the time being.

Now more work is being planned by DDOT. Those plans include designating the four lanes on the Rochambeau span as HOV-3 lanes, which means that they are free to vehicles with at least three people in the car. HOV hours would be the same as on I-395 in Virginia. Plans call for these lanes to be converted later into HOT lanes. The goal is to reduce the number of single driver vehicles into and out of the District.

Other discussions include adding a northbound lane to the bridge and the addition of a merge lane carrying traffic from the southbound bridge lane to the northbound George Washington Memorial Parkway.

Questions remain about how the toll monies collected will be used to maintain the bridge infrastructure, a concern of D.C. Council Member Mary M. Cheh, head of the council’s transportation committee. According to an article in The Washington Post in April 2014, she said that the possibility of a reduction in federal funds makes the concept all that more viable. “It makes sense to have, in effect, these user fees if we are going to be able to maintain the infrastructure we need.”

Justification for the project is still being studied, according to the article.